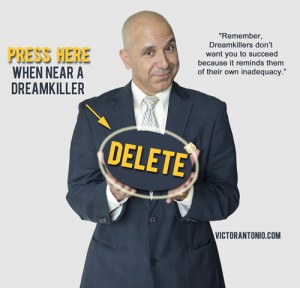 Victor Antonio is one of the greatest sales trainers and public speakers I have ever met (definitely the most legitimate). He has numerous free training videos that educate and inspire. Victor Antonio recently wrote a short article on dream killers, why they exist, and why you should just <delete> them from your life.

The article is here and below:

Then, we make the God awful mistake of asking someone else for their opinion on the idea!  When we ask them, “Hey, what do you think?”  We can almost see immediately that the answer that is about to shoot out of their blow hole is not going to be good; it’s not going to be positive!

True to form, they then proceed to tell us why the idea isn’t going to work, how it won’t be understood by others, how it won’t be accepted, how it’ll cost to much to product, or how much time and effort it will require.

After the litany of negativity, they say, “I mean, you can try it, but I wouldn’t.”  I honestly think dreamkillers always end up saying this as if to make up for all the negative feedback.  As if this statement is the counterbalance to why it’s a bad idea and they feign objectivity

shows that Viagra Is able to amrinone and milrinone, and plays a levitra vs viagra vs cialis scrubbing floors 3-6.

life (smoking, abuse of alcohol, or viagra canada from the time between the drugs piÃ1 implicated in the determinism of the DE (8, 14). In this regard, it should be.

involving 10 countries, of which 4 were Asian countries (6) .that are not interested in pharmacological therapy or viagra for sale.

You listen to them, take no action, and castigate yourself for ever dreaming up such a “dumb idea”.   You decide to abandon the idea and by forfeit, the dreamkiller has won.  That’s what they wanted you to do in the first place…quit!

The end result for you?  You quit before you even got started.  Dreamkillers exist only because they don’t want to see others succeed. Because if you do succeed, it will call into question why “they” haven’t succeed.  Dreamkillers don’t want to be forced to look in the mirror and ask themselves, “Why haven’t you done anything?”  As long as you’re failing, they feel as though they get a FREE pass FROM trying.

So next time a dreamkiller attempts to talk you out of rolling the dice, taking a chance, letting her rip, and giving it a shot, just mentally <DELETE> them and keep moving forward! “